….a little while later

Me: “Well, maybe you should find another way to do it.”

….not long after that

Them: “AAAHHHH, so much pain when I do this.”

Me: “Perhaps you should go see someone who can help you find a way around the pain.”

…..seriously, not more than a few moments later

Them: “I swear, this pain is going to kill me; it hurts so freakin’ bad when I do this.”

Them: “I don’t have a choice, I have to because (insert excuse / justification / reason here)

….because they still aren’t getting the reaction they want, a few minutes later

Them: “I just can’t bear the pain when I do this.”

Them: “You’re a cold, unfeeling, shallow @#$% and I don’t want to be your friend anymore.” 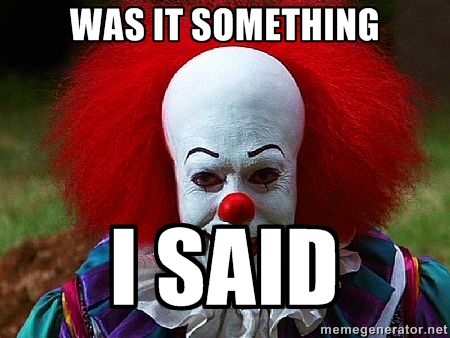 Okay, so maybe I could learn to be a little more sympathetic but seriously, if

and you refuse to stop, then why are you still whining about it? If it really, gives you that much grief, then DO the work, MAKE the change. Do what you need to do to STOP the pain!

You’ve perhaps heard the saying, “God helps those who help themselves.”  I’m like that, I’m a fount of energy and support when I see someone working to be better themselves, but that wallowing? I have enough of my own pity parties (I apologize, I have posted quite a few of them) thank you very much. And I have friends who, when I’m wallowing (and I do catch myself rolling in the muck), deliver a swift kick in the butt with some tough love and a time limit. If, at the end of that time limit I haven’t taken down the pity streamers and such, they give another swift kick and some additional tough love, which usually does the trick.

That’s me – the swift kick and tough love kind of friend.  Apparently not a lot of folks get down like that.

LOL. I’m not that bad, seriously. I might be all about the one-session therapy deal,

but I know, from experience that it is definitely easier said than done.  So, I can be somewhat patient, sympathetic, even gentle, but I have my limits. I get impatient with myself, so you can imagine how I am with other people.  😉

I want humans to ascend to their greater goods, I really do. And as it says in my tag line, I’m in the human construction business – I build people up so they can be their best selves. And sometimes, in order to build something up, you have to tear the old structure down.  Just saying.