Summer, 1992. I flew home from college for the last time. An unremarkable trip, one of many plane rides I’d taken in my then, twenty-four years of life.  Got home, got settled back into a routine, again, nothing remarkable. Till one day, I found myself driving by the airport. I had an anxiety attack. The idea of getting on a plane suddenly filled me with all kinds of “nope”.  I can’t tell you what sparked it, but I’ve been nervous about flying ever since. Mind you, it’s not enough to stop me from traveling, but boy howdy am I one jittery woman the entire flight. I won’t sleep the night before a flight, sometimes I’ll even take half a sleep aid about an hour before I board, just to make sure I sleep the entire way.

Now, that’s when I fly on real planes, 747s and the like. Imagine my horror when I found out I had to fly from Placencia back to the big airport in Belize City in something quite a bit smaller? We’re talking a 20 minute or so plane ride so you know it’s a teeny, tiny, wind-up toy of a plane. Mom did the right thing in not telling me about it until the absolute last minute.  I clutched my memories of Robert’s Grove around me as we headed the five minutes from the resort to the (HA!) airport at Placencia.

And as if that wasn’t bad enough…

Yes my friends, that little mini-van with wings was the plane.  I could have cried.  That plane had already made four or five round trips to and from Belize City. It had to be safe, right? Did I mention the rain clouds moving in? Did I mention the careful way the guys were stacking the luggage so the plane would be balanced properly?!!

Yeah, so, I’m saying all kinds of things to myself to keep me from running away back to the resort when it comes time to board. I’m about the fifth or sixth person on the plane. I choose a window seat just to the right of the pilot. He turns and says, “you’re welcome to sit up front if you like.”  Up front. As in shot-gun. As in knees to knobs with the freaking controls!!  Are you kidding me? I politely decline leaving the co-pilot space empty for a young woman who I believe was still a little inebriated from the previous night’s revelry. smh. My initial reaction of course? “We’re going to die.” 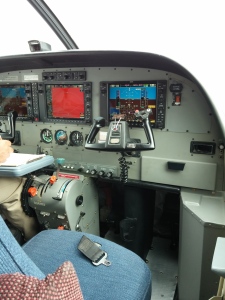 Fortunately, we didn’t die. We didn’t even come close, not even when the clouds opened up and rain pummeled that little plane for all it was worth. Okay, so it only rained for maybe two minutes, felt like the Heavens opened up with enough rain to float the ark but I might not have been thinking that clearly.

When it comes to my next trip to Belize, I will more than likely look at taking a van, a cab, hell, maybe even a donkey back to Belize city from where ever I stay. I’m not so sure I can do that little plane deal again.  😉

All in all, I hope you enjoyed my little “slide show” of my amazing trip to Belize. I also hope you manage to find your way to that little spot of paradise. Dividing our trip between the two contrasting resorts was a great idea, I’d highly recommend if you have the time, you do that as well.

Until next time, thanks for stopping by.

2 thoughts on “And then this happened. (Vacation slides, the final shots)”