Hey there. Doubt that you’re old enough to remember slide shows as they were before the digital age. Slide shows used to involve specially developed pictures, a noisy, sometimes super hot, machine which shone a crazy bright light through the picture in order for it to show up on the wall. Folks were notorious for boring their friends and neighbors to tears with carousels upon carousels of vacation slides. Well, I hopefully won’t bore you, but I’d like to share my Belize vacation “slides”. Quick, grab some snacks and check this out. 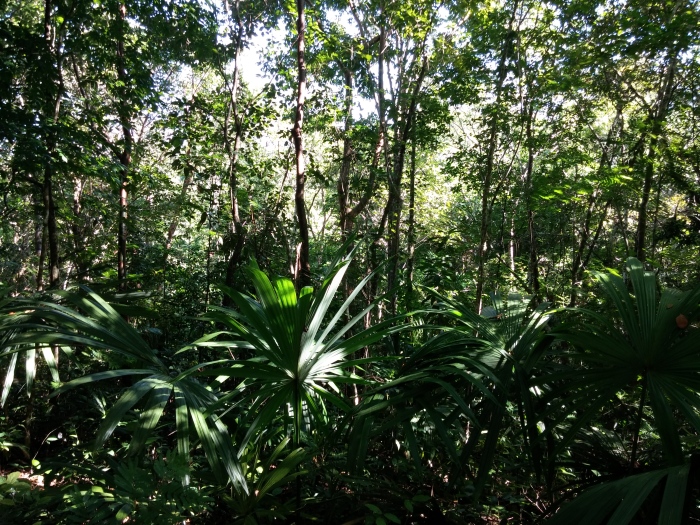 Imagine you’re standing in a field, in an area that before humans got a hold of it, was nothing but lush, green forest teeming with all matters and sorts of critters, vegetation, and such. For whatever reasons, you decide to buy the land and restore it to its former glory. That’s the basic story behind the land on which duPlooys (family owned and operated since its inception) Jungle Lodge sits.  It’s hard to believe as you walk the grounds that just a hair over twenty years ago, the land had been cleared and used by farmers; when you’re looking up into trees that are over twenty feet high, or down at ground cover that’s healthy, thick and green, you can’t help but feel as if you’ve possibly stepped back in time to the height of the Mayan civilization. 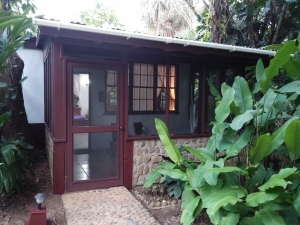 Oh, to be a kid again. The cabins (ranging in size from a comfortable two person cottage on up to a full family guest house) sat in little groupings situated close to the main office, dinning room, and bar areas. It reminded me of the summer camps I’d attended as a kid – log cabin type deals that unlike those camps of my youth, were smartly appointed with comfortable lounge chairs and hand-woven hammocks on the screened in porches.  Each cabin has its own bathroom, so unlike summer camp, there was none of that getting fully dressed, grabbing a friend (and a flashlight if it was dark), if you had to ‘go’.

The dining room and bar area just perfect for socializing. Or feeding the local wildlife. Just off the railing around the bar is a platform where the staff set out fruits and veggies. On the days we

were there, a myriad of birds made their way to the feasting, providing quite the pleasant (if not sometimes LOUD) sound effects to our conversations. Then there was this little guy. That’s a Kinkajou.  He eased down from the tree to perch on the railing, taking cut up banana pieces from our hands to then turn his head upside down to eat. Yes…upside down. Not quite sure if they all do that but this one certainly did, every time he took a piece of banana to his face. Go figure.

Not quite sure what all else lived in the jungles but I know for sure I saw some small bats, and two of the biggest, most brightly colored Iguanas I had ever seen in my life. Both were in trees quite a distance from where we were – the first one caught my eye because I thought it was a tiger. For real. The distance combined with my not so sharp eyesight and the heavy rain falling blurred things to the point where all I could discern was the orange with black stripes of its skin.

Upon further inspection and the wonderful telephoto lens on my mom’s camera, I was able to see it for what it was…

There were also Howler Monkeys, some pretty big frogs and assorted other critters that I’d only “seen” in nature shows on television. All right there, in as natural a setting as you can have.

While you’re there, be sure to see the ruins

Not far from the Lodge are several Mayan ruins. I went to see Xunantunich.  It is amazing to me that I can touch stone that was handled by humans thousands of years ago. Gave me shivers. Not to mention how it really is AMAZING that with out the “benefits” of modern technology, those same humans were able to build these structures; and not just build them, but place them so they match perfectly with celestial points and occurences. They told time with some of these buildings in that they sit in the path of the sun during certain times of the year illustrating the beginnings of how calendars came into being.  Humans can be so awe-inspiring sometimes.    (to be continued) 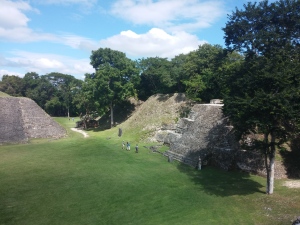 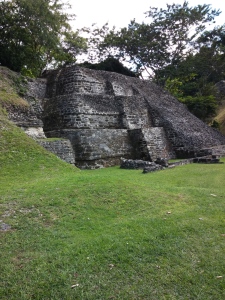 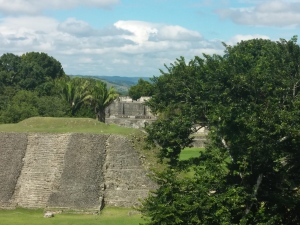