NaNo-ites (NaNo-vians?) all over the world sent up a collective cheer as the refreshed NaNoWriMo site went live a few days ago. Since then, the interwebs has been a flutter with posts, status updates, tweets and such as writers took to updating their NaNo profiles.  I wasn’t sure which novel I was going to attack during the 30 days of writing mayhem that is November. I have two ideas currently percolating on their respective burners to the rear of my writing stove. Aphrodite’s Twin is languishing on the warming tray in the bottom. I’m hoping it doesn’t dry out before I finally take it out and serve it up in its print form. (*pops open warming oven to do some basting – a.k.a. editing tweaks*).  Sorry, got to thinking about November with the Thanksgiving feasting which prompted me to take the cooking metaphor (thin as it was to begin with) too far.  *ahem* Anyway, the two ideas I had were so strong, I knew it was going to be a toss-up; a decision I didn’t expect to make until a minute past midnight on Halloween – the official start of NaNo.  But, as I was sprucing up my NaNo profile for the year, without hesitation, I typed in the title of the novel I’ll be working on.  I’m not completely surprised that of the two, it’s the one that my Muse (and perhaps my Divinity) chose. The other idea is good, but definitely doesn’t speak to anything going on in my life now.  Well, now that I think about it, that’s not entirely true.  Hmmmm.

So, knowing that either story may hold some insight from my Divinity, I may still attempt the crazy goal of completing both drafts – 50K words a piece – during November.  Perhaps if I create another profile, I can track both novels. Stranger things in my life have happened that’s for sure. I may have to give up the blog for a while in order to make every word I type exist solely in one or the other manuscript. Ah, who am I kidding? I use this space to prime the pump. After a post or two, the words are warmed up and flowing free. Besides, since giving up Facebook and Twitter, where else can I go to keep you updated on my word count? 😉  BAH! Two profiles on the NaNo site? Now that would be insane. 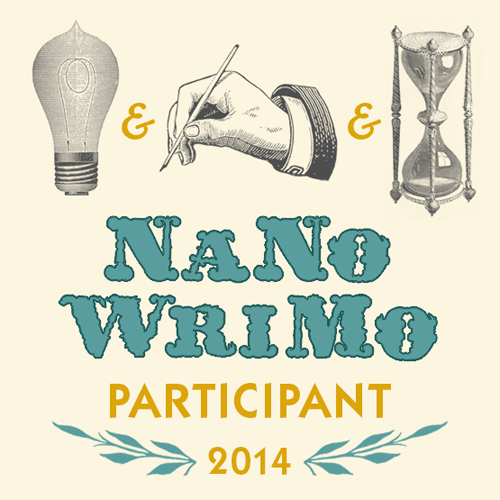