Yes, so…I don’t know. Should I or shouldn’t I? With all this talk about depression and such, I can’t help but to be reminded of my experiences with it. I won’t say I’m “cured” but that I have learned how to LIVE with it.  I wonder if adding my story to the already thousands out there will help in any way, or fall amongst the pile unread, disbelieved, or worse, taken as an attempt to capitalize on the “craze” so to speak.  But writing for me is like breathing. I’m compelled to do it in order to survive.  Hmmm, well, here’s my story. Take it for what you will.  At least I’ll have gotten the words out.

I believe there is some strain of mental illness that runs through my family, particularly in the women on my mother’s side. It’s not something we talk about so I’m not sure. There are stories though that talk of behavior I can only attribute to some form of depression or similar mental glitch.  I don’t remember being “depressed” as a child, but circumstances combined to definitely put me in that state by the time I went off to college.  Bullying, sexual abuse, and a host of other experiences had robbed me of my self-esteem and sense of self-worth.  So, it wasn’t long into my first year that I discovered that alcohol was wonderful for numbing me up – I didn’t feel anything when I had a

little go juice and that allowed me to function in social situations. It allowed me to pretend.  By my third year in college, I spent more time in my bed than I did in class and you could count on me being drunk most Friday or Saturday nights.  It was during my third year, that my then boyfriend attempted suicide.  We’d talked a lot about his depression, I’d listened, I’d held his hand and such. I never once tried to make light of what he was feeling or why. I couldn’t because I was feeling the same, just didn’t want to say anything for fear of coming across as if I were trying to make it all about “me”.   When it came right down to it, I couldn’t talk him out of wanting to die because I didn’t want to live. How do you tell someone they have something to live for when you, yourself don’t see the sun shine each morning as a reason to get out of bed? He attempted to overdose on Tylenol.  He called me after he’d taken the pills and I walked off my job to be with him (I was an RA at the time – already on probation, me leaving my post unattended was cause for dismissal). I’d been at his place for about an hour before he told me what he’d done. Right about then, he started throwing up uncontrollably. I called for an ambulance and rode with him the 30 minutes or so to the hospital.  Side note – the ambulance driver who was a familiar face around campus, tells me, “I don’t want to wish any bad luck on your boy, but if he doesn’t make it, do you think I could take you out sometime?”  Yeah, you can imagine the look on my face.

Anyway, I spent the rest of the semester lying to people about why he’d gone to the hospital. I also lied to myself about how I felt. I was all kinds of ways afraid and angry. I decided that my suicide would be quiet; I’d go somewhere so that none of my loved ones would find me and I certainly wouldn’t call to have someone sit with me while I died.  Who does that?

It would be years after that when the desire to end my life reached its peak. I was five or six months pregnant. The father of my child was living his life. I was in a fairly isolated situation in that I had moved out of my mom’s house and didn’t have a car. I had friends, but my mental state conspired to keep me from asking for their companionship or from sharing my state of mind. I was busy keeping up appearances.  I don’t know what day it was, but I know I was in my apartment, alone, ‘baby-daddy’ was where ever he was. I was curled up on my living room floor, sobbing. I had the knife close by.  I wasn’t concerned with who would find me because no one really came by that often. I was sure I’d die quietly and it would be the property managers who’d find me when I hadn’t paid my rent.

Here is where life turned around for me.  Someone knocked on my door. Now mind you, two things – number one. I was not friends with anyone in the entire apartment complex. I was not expecting company and the baby-daddy had a key.  I couldn’t think of who would be at my door, or why.  Number two, I HATE to cry and I HATE even more, for anyone to see me doing it.  The knock on the door meant I had to pull myself together quick. I did, wiping my face on a dish towel as I put the knife back in the drawer. When I opened the door, there was this guy. He asked me about some music he’d heard coming from my apartment a few days before; he’d said he wanted me to make him a couple of copies – this was back when cassette tapes were all the rage – I said I would, as he promised to be back with the blank cassettes. I don’t remember him telling me his name or which apartment he lived in. I don’t remember hearing a door open or close on the floor after I closed mine, and he never came back with the blanks.  I got tired of standing by the door so I went to lie down in bed. When I got up the next morning, I remember being appalled at what I had been considering the night before. It wouldn’t have been suicide, it would have been murder because it wouldn’t have been just me who died. Suicide was fine, but murder for some reason was beyond my capacity to justify.

My reason for living was born July 18th, 1993. I have found reason after reason through her to continue looking forward to tomorrow. Now, I’m not advocating that having a child will save anyone from depression. In fact, it can quite often be the opposite – having a child can tip the scales for people who may have otherwise just had general feelings of blah.  I can only say that for me, my daughter gave me a reason to keep waking up. 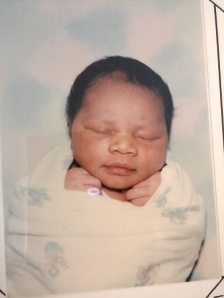 Depression is still a part of my life. I have episodes where I struggle, where I fall back to drinking too much, but because of my daughter I took some hard, hard looks at my life and have done some tremendously difficult work to heal wounds which served as triggers to my depressive states. I have all kinds of tricks, tools, and behaviors to fall back on when I’m in that dark place that indeed, help me keep getting up in the mornings. Mind you, I don’t believe depression ever goes away. If your brain is wired for it, then you experience it. Period. I have instead attempted to make peace with it in an effort to continue living.

It’s hard to give advice to other sufferers. Much like my boyfriend back in the day, I know all too well how it feels when you are just tired of the pain, tired of not being able to see the light. In some cases, I feel  suicide is the merciful end to a life lived with a debilitating disease. Much like people who have terminal cancer asking to be put to death as a means to end their suffering.  But then, I don’t tend to view death of a loved one quite the same way as others. I don’t believe anyone should be kept alive just so I feel comfortable. I shudder at the thought of my mother or any of my immediate family / loved ones dying, but I ache even more so at the thought that any of them should linger in pain just because I don’t want to let go.  My daughter is showing the familiar signs – that emotional overload, crying for seemingly no reason.  The best I think I can do, is share with her my stories, to tell her how I managed, how I survived and that she can live a fulfilling life despite those moments of soul shrouding sadness.  But when it comes right down to it, if she ever told me she didn’t see a reason for living, I’d be hard pressed to ask her to hold on for my sake. Does that make me cold-hearted or unfeeling?   I hope not. I hope instead that somewhere in there is compassion – I don’t want my daughter or anyone with this disease to suffer, I’d rather they finally find peace from the pain.

R.I.P. to all who couldn’t find their reason for living.  I sincerely wish you peace at last.

One thought on “Since We’re on the Subject”